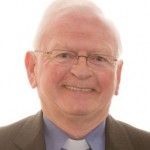 I was born at Downings, Prosperous. I am the eldest of seven children born to Patrick Harrington and Catherine (nee Lambe, from Robertstown). Thanks to my parents, brothers and sisters, I had a very happy home life. I lived most of my childhood and adolescence in Kilmeague, and attended primary school in Robertstown, where my father was principal teacher. I got my second level education in Knockbeg, Carlow. I studied for the priesthood in Maynooth, and was ordained in 1960. I was curate in Portarlington form 1960 to 1963, curate in Newbridge from 1963 to 1976, chaplain to the forces in the curragh Camp from 1976 to 1988, parish priest of Suncroft form 1988 to 1995, and parish priest of Clane and Rathcoffey since September 1995. In August 2008 I retired as Parish Priest but have remained on to servea as curate in the parish.